I've decided to start a new blog - this one's gettin' a little old.

The new one probably won't be a whole lot different, but it's got a different background and a funny picture at the top and stuff like that.

So check it out! It's called My Brand New Weight Loss Blog - http://mybrandnewweightlossblog.blogspot.com/.

Thanks for reading "The Curvy Catholic" - hope you'll enjoy the newer incarnation of it!
Posted by Aunt Chrissy at 8:00 PM 1 comment:

Father Ted explains it all for you! 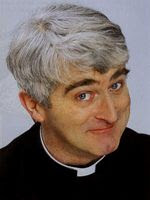 Just read a couple of articles today about "squatters" who take over abandoned blogs. So thought I'd better check in to let you know:

This blog has NOT been abandoned!

Hmm, yeah, I know, I was going to post more often and now here I am, blithely checking in after only, what, two weeks?

But this seems to happen with every new blog I start.

I get all enthusiastic - "THIS time I'm gonna be the best blogger in the WHOLE WIDE WORLD YAYYY!!!"

I post every day, or at least regularly, for a few weeks.

Then on my regular posting day, I sleep in - Aww, no one will notice if I miss ONE DAY, right?

Then another day, I get all caught up in ... well ... LIFE. Biking, or reading a really good book or (embarrassingly enough) reading someone ELSE'S really hot blog.

And before I know it, it's been ... well ... two weeks since I posted and I can't think of anything to say!

OK, I DO know something I can write about! I'm supposed to do a humorous speech at my Toastmasters club on August 25.

And I have ABSOLUTELY NO IDEA WHAT I'M GOING TO WRITE ABOUT!

I've been recycling a lot lately.

I'm one of those people you see at the gas station or the park, busily digging through the trash in search of the Holy Grail of recyclers: glass bottles!

Actually, beer cans and water bottles are just fine, too. Some of the plastic bottles bring 10 cents, most only 5 cents. But hey, every little bit counts, right?

And for those who are too fastidous to dig through the trash, I've noticed that, especially on hot days, people have a strange tendency to buy a bottle of water or soda, take one or two big swigs, then chuck it to the ground - not even bothering to look for a trash can.

What slobs! But hey, more for us dainty types!

I don't really bring in a whole lot of cash this way, but it gives me an extra added incentive to go out and walk every day.

Recycling - Good for the bottle, good for my can!
Posted by Aunt Chrissy at 9:29 PM No comments:

My folding bike - not so comfy but great against coyotes

(I posted essentially the same version of this story in today's Folding Bike section of Bike Forums - enjoy!) 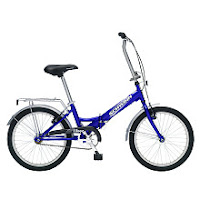 So today I got my Schwinn Hinge Folding Bike back from the bike shop (Metropolis Bikes in North Hollywood), where I'd left it for a tune-up, and was pleased to find that they'd not only done a thorough job of checking it over, they also installed a metal bottle cage on the handlebars, free of charge - thanks guys & gals!

I drove it a few miles to Valhalla Memorial Park, a totally cool cemetery with great views of both the Burbank Airport and the Amtrak/Metrolink train station. It's also the perfect place for out-of-shape folks like me to exercise - because there are NO HILLS! Yes, it's totally flat! And bonus - since it was a hot day, the sprinklers were going; making it the perfect place to test-ride my newly restored folding bike!

I took it out of the trunk and unfolded it. The hinges have always been a little clunky to use and they still are, but the Metropolis guys put some oil/lube on them so they worked as well as they're ever going to work. Once I got it set up, I adjusted the seat, put my feet on the pedals, and started to ride ...

... when what to my wondering eyes did appear but a COYOTE - yes, a real live coyote! - headed straight for me!!

Well, I was a little nervous but what that coyote didn't know was that I'd spent a hectic morning chasing a pack of wild Chihuahuas away from my yard at home, and figured, hey, a dog is a dog, right? I'd gotten rid of the evil dogs by running towards them at full speed, yelling and waving a stick, which did the job quite nicely (also works for Jehovah's Witnesses btw ).

Anyway, so back at the cemetery, I figured I'd just do the same thing. Rather than turn wheel and run, I pedaled harder, directly TOWARDS him, shouting, "Bad dog! Bad dog!" That was all it took - he turned around and ran (followed closely by one of the cemetery groundskeepers, who'd been keeping a close eye on the situation from his tractor a few feet away).

All in all, I was quite pleased with my Schwinn Folding Bike's performance. Sure, the seat is still a little uncomfortable and it's a little hard to pedal. But it keeps the coyotes away, which is pretty much all I ask of any bike, folding or non-folding.
Posted by Aunt Chrissy at 3:20 PM No comments:

Obsession, or Why I Haven't Blogged for Two Weeks

Yeah, sorry about that. I tend to go on autopilot sometimes, and just can't stand doing any heavy thinking, much less writing, for days at a time.

I know I should be blogging more ... one of my commenters a couple of posts back said I should post every day.

Yeah, okay. Hmm. I don't think so! I have enough trouble hitting this thing once a week!

But in case you're interested, I do have some interesting stuff going on.

a) I've gotten into biking. Again. See, I have this tendency to get really excited about a subject, hobby, activity, religion (or lack thereof) for a while, till I reach the pinnacle of success with it. Then I get bored and move onto something else.

So two years ago, I got really into the idea of getting a bike. I wound up buying THREE bikes in a row:
I salvaged the Explorer with a bike trainer, which basically turns the whole bike into a stationary bike. Steve and I used it for a while, till we got tired of it.

The Townie sat in the garage, being wheeled out occasionally to keep it from rusting and to keep me from feeling guilty for spending so much $$ on it.

The folding bike I gave to my mother-in-law, who thought a friend of hers might want it.

But earlier this year, Steve and I made a trip to Kansas City to visit my Grandpa, and made a side trip to Sedalia, Missouri, where I'd spent a very happy three years as a teenager. While there, I showed Steve the places I used to go on my bike, and we were BOTH amazed to find out how far, and how confidently, I'd ridden.

Why had I stopped? Well, I'd gotten older, gotten a car, and gotten fat, pretty much in that order!

Then I wheeled the Townie out of the garage, pumped air into the tires, plopped my old helmet on my head and (deep breath) went for a ride around the block.

It actually felt ... not too shabby! So I started riding it more and more - not long distances (yet) but have gotten to the point where I can go to the Reseda Post Office and back, without a major amount of sweat.

And not only that, but one evening Steve's mother-in-law casually disclosed that she still had the folding bike, didn't want it anymore, and would I like it back? I said sure!

It, too, had flat tires, and I decided to take it to Metropolis Bikes, a bike shop I'd visited a few times, in North Hollywood, California, for a total tune-up.

It'll be ready for pickup tomorrow. I'll let you know next week how it rides.
Posted by Aunt Chrissy at 5:00 PM No comments:

Congrats - last two books given away!

OK, here's what I did. I decided to go back to the ORIGINAL contest comments, find two non-winners who HAD left their emails or at least were easy to contact, and just give THEM the two remaining copies of Michael Spencer's "Mere Churchianity".

And the lucky winnas - to be contacted as soon as I finish this post - are:

joederbes
Yayy!! Congrats to both of you! I've sent you emails and as soon as I get your reply & mailing addresses, I'll pack 'em up and ship 'em out.

And if I don't hear from YOU guys in a week - well, let's just say I'm a registered Amazon Power Seller and I KNOW HOW TO SUBMIT USED BOOKS BWAH HAH HAH HAH HAHHHH!!
Posted by Aunt Chrissy at 6:29 AM No comments:

Labels: contest, mere churchianity, michael spencer
Older Posts Home
Subscribe to: Posts (Atom)
WHEN SOULS HAVE BEEN ILL-TAUGHT about God, the true God will not let them gaze too long upon the Moloch which men have set up to represent Him. He will turn away their minds from that which men call Him, and fill them with some of his own lovely thoughts or works, such as may by degrees prepare the way for a vision of the Father.

My other Blogs and/or Web Pages

Welcome to The Curvy Catholic!

The blog of a happily married Southern California Catholic trying to follow Jesus Christ as best I can, regardless of where He might lead. (He's not a TAME lion!)